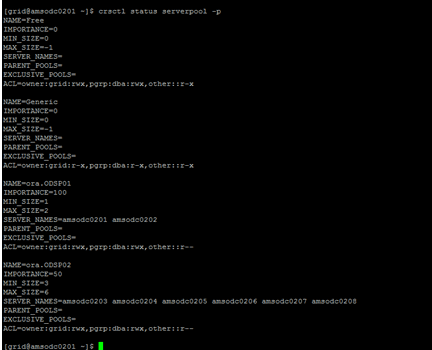 The server pool is a new feature in Oracle Clusterware 11gR2. A server pool is the logical division of the cluster into pools of servers for effective resource utilization. Server pools are used to create Policy Managed Databases.

Policy-Managed database facilitates easy allocation of resources to specific workload and simplifies the consolidation of Databases and Applications on Clusters.

There are 2 default pools after a Grid Infrastructure Installation:
 Free – any unassigned nodes
 Generic – for administrator-managed databases

Each pool will be assigned with some attributes are as follows:

IMPORTANCE (priority): The importance specifies the relative importance between the server pools. Default value is 0 to 1000.

MAX_SIZE: The maximum number of servers that can run in a server pool. Default value is 0 or -1 which indicates that all the servers in the cluster can be a part of this pool.

 Distribute a uniform workload over several servers in the cluster.
 In server pool, the host of the cluster are added and removed from the pools more easily; it has taken off the burden from the DBA’s for the allocation of host in the cluster.
 With few attributes which takes care of the whole cluster became much easier for the administration, especially when the number of nodes go beyond two digits.